I’m 17 weeks pregnant and still taking the SSRI antidepressant Sertraline. I thought I was pretty firm in that decision. An attempt to stop taking it last year ended badly.  But we had to try, if only to help us work out where we sat in the endless risk/benefit balancing act. 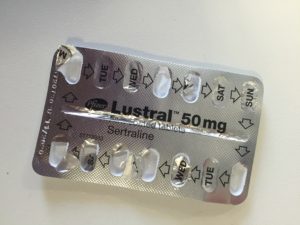 But I was still thrown when my GP (a new doctor who didn’t support me through withdrawal, relapse and re-prescription) told me I should try to come off – “You could just stop immediately on that amount – or you could take it every other day for a couple of weeks and then stop”.

She seemed convinced the main reason I found it hard to come off them last time was because I was anxious about trying to conceive. In the time we had it was hard to explain that it was considerably more complicated than that.

When you are pregnant and also manage mental health problems you have lots of people telling you what to do. Different authorities often have slightly different agendas, follow different recommendations and suggest different things. It feels like an extra layer of disempowerment and it’s hard not to get caught between what’s best for your mental health and what’s recommended in pregnancy.

But despite ALL this, I still walked away from the doctor feeling pretty wobbly and thinking “maybe I should, the doctor is telling me I should after all”.

It took another discussion with Alex and some more reading and research to help me feel confident in my decision again.

Drugs are not clinically tested in pregnant women. This article (published in Clinical Obstetrics and Gynaecology) sums up some of the issues and research. It’s worth saying that we don’t know a lot – even the studies and research that have been done are often very small and there are lots of unanswered questions. It’s also worth highlighting that the authors here seem to have links to a number of pharmaceutical companies. But my understanding, from this and other research I have read, is as follows.

As far as we have been able to determine, these may be reasons to keep taking them.

There are lots of things we don’t know about any potential risks.

And given how things have gone since, I would have really struggled to add an extra imbalance into the mix. I have recently spoken to a wonderful midwife who really seems to understand and, based on my notes and history, said that the most sensible thing I’ve done is continue with the Sertraline. She has also referred me to additional support sooner than I would have got otherwise.

Read my other blogs about the first trimester.

6 thoughts on “Antidepressants (Sertraline) and pregnancy”