I’m also almost 30 and with a long term partner. It won’t be long until I’m thinking more seriously about pregnancy. Future pregnancy is one of the reasons I am trying to cut down. I’ve been told in the past by doctors that they would always recommend a mother continued with appropriate antidepressants during pregnancy if she needs them – that a depressed mother is a much greater risk to a baby than anything else. But, ideally I’d rather not be taking them – especially given the occasional headlines about the risks. These tend to ‘trigger’ increased worry and rumination associated with depression. It’s not always rational – but depressive thoughts aren’t.

Today’s article was a particularly bad one for anyone on antidepressants (and therefore with a mental health difficulty of some kind) and considering/already pregnant. There is no recognition that someone in this state might be more emotionally vulnerable and need clear, straightforward information and not emotionally charged, attention grabbing stories and pictures.

It shows us a picture of a baby hooked up to all kinds of machines and a toddler who will ‘need more heart surgery’ before he is five. As someone considering pregnancy and on Citalopram this does nothing but send me into a maternal, emotional panic.

It is incredibly unbalanced. Two or three lines are given to more accurate information saying that the cardiologist said that the heart problems had no clear cause and could not have been prevented – and to the information on reviews and reports that say there is no clear link.

It mentions a drug (Citalopram) by name – making people on that drug feel especially concerned. The woman they have interviewed – who was taking Citalopram during pregnancy – says she would have stopped in a flash if she had known there was the tiniest risk. There is no admission or exploration of the fact that not everyone can do this.

Luckily, a few tweets later and I have a link to the RCPsych statement on the headlines. 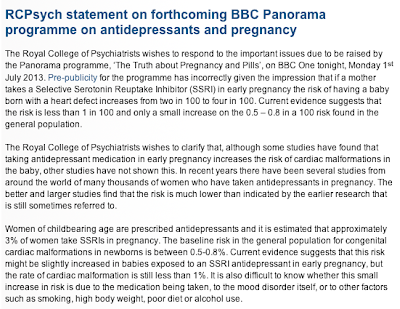 According to this much more balanced piece, the pre-publicity is wrong and the study is not as decisive as the BBC implies. They also end with a reassuring and helpful statement on the balance and risks of medication during pregnancy and the importance of discussing this with the doctor. There is a recognition that the headlines could be damaging for those reading them and an attempt to give a more balanced viewpoint.

I appreciate that the role of BBC journalists is to give us short, readable news pieces  – and that there is a need for headlines that grab peoples attention. However, I also think there is a need for an understanding of the impact of these on the people who they most affect. Words, pictures and stories are powerful mood influencers – often positively but also negatively.  I’m still feeling slightly sick and edgy from reading the initial BBC piece. Luckily I’m able to stop these from spiralling down into something more anxious, depressed or panicky – but not everyone who reads it will.