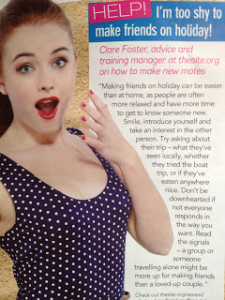 in a field, surrounded by old copies of teen magazines, reading the problem pages with a strange mix of awe and derision. There was the frisson of excitement caused by the ‘sex and relationship’ problems – aged 12 or so, the whole ‘sex thing’ was still pretty adult and mysterious in practice. This was combined with the certainty that, despite our lack of knowledge, we wouldn’t ever be so stupid as, for example our favourite, the couple we read about who used a crisp packet as a condom. The problems, not the answers were the most interesting to us, and we always turned straight to the problem pages.

Last week, I was published in Bliss magazine, approached in my role as Advice and Training Manager working on TheSite.org. Not on the problem pages themselves but on a page which approached various holiday issues by posing questions “HELP! …….” and then asking various experts to answer them.

But the problem pages are still there too. It’s interesting to look at them from the perspective of the support we provide on TheSite.org. For a long time ‘agony’ pages in magazines and newspapers were one of the only ways people could get general – and anonymous – advice, support and sympathy – the sort  of thing so readily available online now. I’ve also just been informed on twitter that ‘agony’ which comes to us from the Greek meant ‘intense struggle’ rather than ‘hideous pain’ as it tends to mean now. This makes more sense in the context of ‘agony’ pages in history.

The history of agony aunts

According to Tanith Carey’s history of agony aunting ‘Never Kiss a Man in a Canoe’, the first agony pages were established in 1691 by John Dunton, a 32 year old man who found that there was noone whom he could ask for advice about his affair without revealing his identity. A magazine publisher himself, he realised that readers’ problems are endlessly fascinating to others and he opened up the pages of the Athenian Mercury to letters from the public. Apparently roughly half were about matters of the heart – things like “who is wisest – a man who marries for love or convenience?” and “is a husband justified in divorcing a wife who tricked him into marriage by wearing make up?”. While entrepreneurial spirit and filling pages was presumably part of Dunton’s drive, it’s clear that the need to ask a question of others anonymously was another.

From moral judgement to emotional support

As Carey says in her book, and Mangan here, the type of advice given has largely changed from prescriptions and judgement, upholding the ‘moral standards’ of the nation and the publication to emotional support, new perspectives and suggestions. Mangan suggests that if readers were willing to follow the advice given, the same problems would not keep recurring down the ages. I don’t think she’s right here – different people at different times are looking for personal responses that they can apply to their own specific issue. In their full emotional and practical complexity, no human has ever faced exactly the same problem.

And that, perhaps is the issue. The generalised nature of problem pages means that they can’t give specific support. Anonymity might be the drive for many, but in a public space like a magazine page, something can only really be anonymous if it is very general. When I was young, I would never write to a problem page for fear that others would somehow recognise me from the problem I described. Everyone always suspects that the ‘questions’ printed are made up. In fact I expect that they are edited and amalgamated versions of a range of issues – potentially those which they are actually receiving a lot of more personal questions about. As a result, the question and the answer risks not being specific and personal enough for any individual to apply the advice to their own, more complex situation.

Questions and answers in publications are more like articles. What type of article depends very much on the publication. Through history, agony aunts have always felt the need to uphold the ‘tone’ of their publication – I wonder what was behind this one from the pre 1920s – “the marriage was illegal and void. It was lucky for you the real wife pounced upon the villain at the church door”. As well as moral constraints, there were language ones – Peggy Makins revealed she was so constrained when she wrote for Women in the 1950s that the word ‘bottom’ was forbidden on any page – even in reference to the ‘bottom of the garden’.

Even now, the nature of the questions and answers in ‘problem’ sections depends very much on the publication. Many are very much for entertainment – appealing to the side of us that loves to read about others’ problems – and so, to feel better about ourselves. These pages often have much longer questions than answers (that’s the interesting bit for the reader). They tend to involve quite direct and often opinionated and judgemental responses – perhaps aiming to reflect the reader’s own judgements on the situation at hand, to enable reader and agony aunt to join in round condemnation or pity for the people involved in the situation. Despite what Mangan claims, we have not moved completely away from this judgemental, moralising approach.

Similar in some ways is Fostrup in the Observer. While her answers are long and thoughtful she often takes a very definite stance on an issue – something that, if she gets right, might helpfully change someones perspective – but if she gets wrong, means the answer is potentially useless to all but the reader looking to be entertained – and certainly not emotionally supportive to the question writer (I explore the importance and subtleties of emotional support here). It’s obvious she always has one eye on this reader – how could she not?

I have been flicking through the Bliss magazine that contained my answer – and here the problem pages are clearly not motivated by just entertainment (although I presume they are aware of that element of their readers’ motivations). The questions answered cover a range of issues that will genuinely worry and concern their readers and the answers give general suggestions and options that those reading may not have thought about. They are not judging or ordering but suggesting and supporting – albeit briefly. Nothing too specific and personal is really possible here – the space is constrained and, as mentioned, in a public space the anonymity of a reader is compromised the more specific it gets. Fundamentally, the aim of the page must be to offer advice and support to everyone reading, rather than individuals. This is in contrast to, for example, our askTheSite answers. These, being confidential, means people can submit complex problems and we can answer them in full, in a really personal capacity, aimed only at the individual writing in. Very different again is askphilosophers.org ‘love and relationships section’ – I explore this in more detail here.

YouthNet’s research on attitudes to sex and alcohol, and that of the Joseph Rowentree foundation on housing both show that young people tend not to look for help until they are in crisis. Prevention therefore becomes more difficult. We need to find or create places where young people are going, where we can include messages that might prevent crisis. On TheSite.org we try and approach this by writing interesting articles about things people are interested in and searching for – and, within this, including the all important health messages or practical information. This too seems to be the role of problem pages in teenage magazines in particular – to include support and health messages, signposting and reassurance in a publication bought and read for entertainment, ‘lifestyle’ and interest. Our role at TheSite.org is perhaps the next step on, offering more specific and personal information and guidance for someone who has decided to seek further help. It’s good that we can work together in this space, the more so the better!

3 thoughts on “Who’s in agony? – problem pages today and through history”