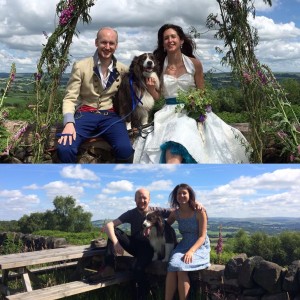 Yesterday we celebrated our first wedding anniversary. Our wedding was a magical day but, in the two years since we got engaged, life has taken some unexpected turns.

My mental and physical health has taken quite a bashing.  I’m not fully recovered – and I’m working hard to challenge and change thought patterns and reactions that have been deeply ingrained for many years. But I’m gaining more perspective with each month that takes me further from the trickiest of times.

So what would I tell the Clare who said ‘yes’ under that tree on Hampstead Heath in 2015.

You can’t control a wedding diet – change the dress, not yourself

I thought I would be able to diet just enough to feel comfortable in a gently corseted dress – and then stop afterwards. But my disordered eating lurked much closer below the surface than I realised. It wasn’t long before my eating, exercise and emotions got horribly tangled. I thought I would never go back there but I slid into militant calorie counting, restriction and purging through exercise with the excuse that it was ‘just for the wedding’. The dress was too big, I spent our honeymoon struggling to find a manageable balance and it took my periods stopping to shock me into making a change.

You need medication – and that’s fine

“You were so proud of yourself,” my mother in law said. And I was. I had been fighting my medication for years, trying to cut down and come off. Stopping was the hardest thing I’d ever done.

And when I finally fought through the initial withdrawal symptoms I thought things would get easier. Instead they got harder. More chest pain. More tears, panic and anger. Suicidal thoughts. More running. More fighting my body. It took three months to realise I couldn’t do it. That nothing was worth the destruction those months had wreaked on my body, our health and our relationship.

I thought I wasn’t myself on medication. I’d been on it so long I didn’t know who I was without it. Turns out its helping me be myself. Without it I was a dark anxious shadow. My world narrowed, anxieties bulged and took over. I retreated into myself and lost the strength or clarity of thought to control eating or exercise demons.

I felt so much better a week after I restarted them that I texted some friends with an enthusiastic ‘I bloody love Sertraline’. And I do. I finally have a simpler, more accepting relationship with my medication. 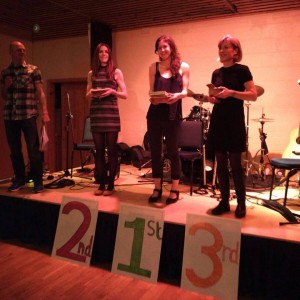 I’ve always asked a lot from my body. I’ve (too) carefully managed my weight and pushed it into regular and hard exercise. I tended to think that was healthier than the alternative. And I enjoyed winning races and achieving faster times. I didn’t think anything I did could actually be damaging. But I’ve been forced to consider a different approach.

When my periods stopped I finally had to admit that things needed to change. That looking after myself wasn’t pushing my body to extremes or restricting fat or calories. Looking after myself was allowing time for rest, relaxation and sleep. Eating for health rather than size. It isn’t easy. But…

The body positivity movement can help

My attitudes towards my body and my appearance are deeply deeply ingrained. I’ve been unhappy with my body since I was nine years old. I’ve always functioned with an almost constant and predominantly negative internal dialogue about my weight and appearance. I’m sure I’m not the only one. 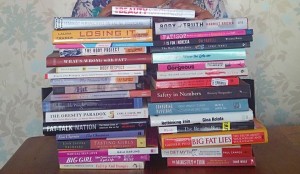 But people are fighting back. Women I respect are talking sense about body positivity. I’ve been reading books, blogs and social media posts that are slowly starting to adjust my perspectives. I recommend Lindy West, Jes Baker, Sofie Hagan, Sarah Millican and everyone at Standard Issue, Megan (bodypositivepanda) and many other women who are challenging destructive attitudes, unapologetically being their beautiful selves, loving their bodies and helping others do the same. It sounds so simple. If only.

Despite myself, I’ve always based far too much of my worth on how my clothes fit and how slim and muscular my body was. Even if in reality I am unhappy and look unwell. It’s a frustrating and irrational emotional reaction. As a first step I’m working on valuing softness, rounder curves and hips as a proof of mental strength instead. Hopefully I’ll get to the point where I can see them on me as I see them in others – as part of a healthy and beautiful body and a more flexible mind.

It’s really hard. Certain feelings (tight clothes in particular) still trigger an anxious reaction which can turn panicky if I’m not careful. I’m still scared of losing control. For years I’ve done body tests and checks on auto pilot. ‘Failing’ those tests would release and avalanche of self recrimination and resolutions. Stopping myself from testing my body and catching that spiral is hard – especially when i’m already feeling anxious, vulnerable or stressed.

But the other day I tried on some clothes that were too big last summer. They were too tight. I did have a bit of a panic but I managed to control it. And the next day I went and bought some clothes that did fit. It doesn’t sound like a big step but anyone who has ever struggled with eating problems (and indeed many women who haven’t) will know it’s a radical one. And I didn’t run for hours either. I kept up my plan to do sensible and gentle park runs instead. My body is changing. It will keep changing throughout my life. I could fight it for another 30 years or I could spend that energy on trying to learn to be happy in my skin regardless.

“Body positivity is like learning a language. You can’t just open your mouth and speak it. You have to hear it around you. You have to immerse yourself in it and try it, little by little, without getting discouraged, without faulting yourself for not knowing it immediately”

I’ve always been impatient to get on with things. I think of my time in hours and days not months and years. But this kind of change takes longer. Even with uncertainty around conception and fertility at stake I can still do some serious double think to enable me to get the running release I crave.

I can’t beat myself up for not being able to cut down on exercise too fast, for seesawing up and down while trying to find the balance with food and weight. Sometimes a photo in which I look larger still has the power to ruin that moment for me.

But I’ve noticed a definite trend in the right direction. It’s measured in months not days or even weeks but it’s there.

The thing is, I could tell my 2015 self all of these things, but I’m not sure I would have listened. Although it’s been hard, I think I had to go through it. I couldn’t make a judgement on whether I should take Sertraline until I knew that being off it was a hell of miserable anxiety. And it’s taken the full force of a relapse into eating problems to push me into making serious moves to change my attitude towards myself and my body.

And I’m sure my 2018 self will look back with more wisdom than I have now. I hope so.

9 thoughts on “What I’d tell my 2015 self about dieting, body positivity and accepting medication”