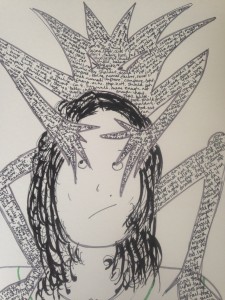 It’s been a few months since I last wrote about the tangle of eating, exercise and emotions I have found myself in this year.

I’m tired. More than anything I’m tired of thinking about food, eating, exercise and what I ‘should’ be doing. It’s just so tedious. Meditation, interesting work, DIY, time spent with friends and crafting gives me a break for a while but I can’t just turn it off completely.

I’m working on accepting that this particular punishing thought gremlin will take up brainspace for a while yet. I’m not going to waste the space I have left worrying about how much he’s around. That seems counter-productive.

Instead I’m trying to tame him by guiding  my thoughts in a healthier direction and gradually diluting them with new perspectives and approaches. Sometimes this works. Sometimes it only gives me glimpses of how things could be. This makes it worse when he grips back hold.

In the grip of the thought gremlin

When he’s got a grip he still sets tests for me and makes me feel awful for failing them . Do certain clothes fit? Do my fingers fit around? How does my body look and feel?

When I ran a 5k 10 seconds slower than my PB he whispered that it was because I was getting fatter. He didn’t care that it was still a sub 20 minute time. Achievements and compliments slide off him and fall forgotten.

Sometimes he chooses to berate me about how stupid I am to worry about it at all when so many people are dealing with astronomically more pressing problems. He’s not going to let me cut down on exercise too much right now – but he’s going to try and stop me enjoying it by telling me I’m doing too much as well.

A tyranny of bartering and balancing. Reassigning guilt and promises. Negative and positive calorie credit. Pinching, pulling, judging and comparing.

Trapped by a grotesque distortion of natural processes that mend and fuel, store and burn energy. That keep me alive and moving hard and fast and well. I’ve hated every inch of skin. I know every fold and dimple intimately. Every tiny growth, bulge or change tells me I should be better.

What I have eaten today? Lost track, list it again. Over and over. Test my wrists, check my bones. If I list it in sections and move the biscuits to mid morning it sounds ok. Doesn’t it? Lost track, list it again. Maybe write it down. It’s ok that it looks like a lot, I ran yesterday and went spinning this morning. But that was to make up for last night when I had pudding. And couldn’t stop eating it (“because of your pathetic lack of self control” – thanks thought gremlin!). So I’m not really in credit, I should run this afternoon. But my knee. My bloody knee aches. If I was sensible I’d rest it. Even thinking of running on an injured knee shows I have a problem. But my trousers feel tight. I feel enormous. My wedding ring feels tight. I could swim. But that doesn’t burn as many calories. It doesn’t give me the FEELING. If I could just run today then that would reset everything. I can start being sensible tomorrow. If I cut down on food then I won’t have to exercise as much. But I don’t want to get back into restricting, it takes up too much headspace. I just want to eat normally. All this exercise makes me hungry. Maybe my knee is ok anyway. I’ll have a cold bath afterwards. Then I can have a nice dinner without worrying. Then the thoughts will calm down for a while and I’ll be able to focus on other things.

I refuse to restrict any more. I’m holding on to normal that way. And I’m HUNGRY. Instead I fight the urge to run and run and spin and swim and drain my body of energy then, as the voices quiet and I feel free of guilt, eat my way back to the same cycle.

On days like this it feels as if even a good day is one where the judgemental voices are appeased not forgotten. How do you stop when eating and exercise are always going to be part of life?

Despite some tricky times he has definitely loosened his hold since I last wrote. I’ve regained some weight and I’m (mostly) ok with that – although still a bit scared of gaining more.

Actually I’m not sure that’s true. I’m scared of gaining more and more and more and not being able to stop. I’m back to what is probably a more normal weight for me. It’s bang in the middle of the healthy range. Now I need my mind to match that.

After a phone assessment two months ago I’m on the waiting list for Cognitive Behavioural Therapy on the NHS. I went to a very underwhelming ‘First Steps’ workshop which was supposed to give us coping strategies to help us manage until we reached the top of the waiting list. A woman read out lists from a power point illustrated with clipart. There was a distracting whine from a machine in the corner that made me anxious. Lots of attendees were confused and frustrated about why there was a waiting list at all.

The premises of CBT were explained badly and without relevant or personal examples for anyone in the room. There was nothing on the reading list specific to my needs. When I reach the top of the waiting list I’ll be given 3 or 4 sessions. I’m prepared to give it a go but I’m not convinced. After a particularly tricky weekend a few weeks ago I’ve been exploring private options. The London Centre for Eating Disorders and Body Image has a specialist in exercise addiction. It’s expensive but it might be worth an initial appointment. The gremlin tells me I’m not thin enough or ill enough but I’m ignoring him. He’s wrong. He convinces too many people they don’t deserve help.

There’s a waiting list for a private assessment too but it’s a little shorter.

I’m surrounding myself with a range of perspectives, attitudes and experiences to try and counteract the inflexible grooves of repetitive thought this kind of disorder encourages. I’m still attracted to books, articles and programmes about weight, diet and calories but I’m trying to make positive choices about the ones I read. Slowly these voices, conversations and images are diluting and drowning out the gremlin. 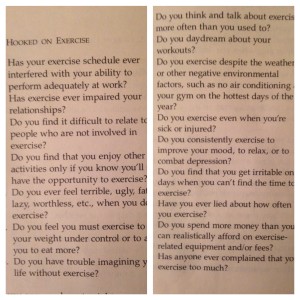 I’ve been reading Hooked on Exercise – one of the very few books I could find that explores exercise addiction. It’s an old text (originally published in 1992) and approaches to treatment may have changed a little but it’s helpful to read case studies and analysis that directly reflects my experiences. The book is divided into chapters which explore different reasons why you might over-exercise. The chapters on ‘Depression and Anxiety States’, ‘Body-Image Problems’ and ‘Eating Disorder Exercisers’ all felt relevant. 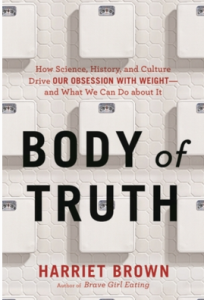 After reading an article by Harriet Brown I downloaded her book ‘Body of Truth – how Science, History and Culture drive our obsession with weight and what we can do about it’. It’s been another perspective on how I accidentally nurtured this gremlin and what approaches and perspectives might help quieten it. I’m currently reading the chapter on competent eating. Eating intuitively in tune with your senses and feelings, trusting your body to tell you what it needs and exercising in a way that gives you pleasure. The gremlin has popped up more than once and told me it’s an absurdly obvious concept to have to relearn. I’m doing my best to ignore him.

As part of my work with Mind I read Lighter Than My Shadow – a moving graphic novel about eating disorders, abuse and recovery. Although in many ways Katie Green’s experiences were quite different, there were many images that resonated strongly. I’ve lent it to my husband to read. He understands anxiety and depression – we fight them together – but this is something he hasn’t experienced personally. Sharing other people’s stories can help those around you understand.

Looking after my body and looking ahead

I’ve seen a lovely physio about my knee. He understands that it will be impossible for me to stop running completely right now. It was a weirdly emotional experience facing up to the potential damage some of my exercise doublethink has caused. Luckily it doesn’t seem to be permanent and lots of stretches, exercises, massages and foam rolling should see me through.

He recognised that it is great to have a healthy love of exercise and running but that if I have to cut down or stop for a while that shouldn’t bring up lots of other issues. That seems like a good aim to me.  I’ll get there.