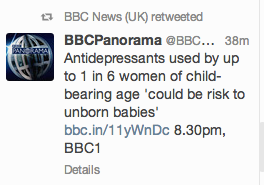 I’m also almost 30 and with a long term partner. It won’t be long until I’m thinking more seriously about pregnancy. Future pregnancy is one of the reasons I am trying to cut down. I’ve been told in the past by doctors that they would always recommend a mother continued with appropriate antidepressants during pregnancy if she needs them – that a depressed mother is a much greater risk to a baby than anything else. But, ideally I’d rather not be taking them – especially given the occasional headlines about the risks. These tend to ‘trigger’ increased worry and rumination associated with depression. It’s not always rational – but depressive thoughts aren’t. END_OF_DOCUMENT_TOKEN_TO_BE_REPLACED