What is successful online support?

There is no foolproof formula for successful online support.  Using the written word to ensure 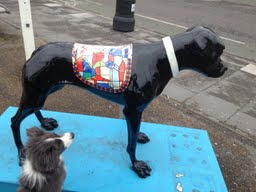 someone feels listened to, understood, informed and positive about their next steps is a complex and varied task.

As with any inexact science it’s much easier to identify when something is done right. It’s a lot harder to teach how it is done. As a result I’m always interested in identifying and exploring in more depth what it is about successful support that makes the real difference. What is it that makes someone respond like this?

“I would just like to say thank you so much as i feel its basically saved my life. The people who reply should be so proud to be able to have that effect on someone like myself who feels there’s no way out of this hell. After receiving my reply i have now realised there is and i now have the courage to get help. Thank you so so so so so much! you’ll never know what you’ve done for me, you’ve saved my life!” (askTheSite feedback)

My previous blog post explored stories and writing and their role in support. Stories and creative writing about experiences create a great vehicle for metaphor and simile. These are really valuable tools in supporting those who are struggling, particularly with mental health and particularly online.  In this piece I hope to explore why.

“because wherever I sat—on the deck of a ship or at a street café in Paris or Bangkok—I would be sitting under the same glass bell jar, stewing in my own sour air.” – Sylvia Plath- The Bell Jar

and Winston Churchill as his black dog (note his description of life without depression as well);

“I think this man might be useful to me – if my black dog returns. He seems quite away from me now – it is such a relief. All the colours come back into the picture.” – Winston Churchill (in a letter)

The black dog has in fact been used many times in history as a metaphor for depression or melancholy. More recently, Sane launched their Black Dog campaign. This aimed to reduce the stigma surrounding mental health and give people the language to talk about it.

“The purpose of the campaign is to give people a language in which to express their inner feelings of anxiety, depression and loneliness, to talk more openly and seek help.” –Sane’s website.

But it isn’t just the famous, the writers and the campaigners who use language creatively. Many people suffering from a range of mental health problems describe their stories and experiences in powerful metaphorical terms.

The intangibility of mental health

Depression, and other mental health conditions can be deeply intangible. Many people have said depression would be so much easier to handle if we changed colour in a depressive period. This would provide ourselves and others with a tangible sign that things weren’t right – and something recognisable to blame our mood and feelings on.

The inadequacy of medical language

In addition, the language we use to talk about depression is often woefully inadequate. The word ‘depression’ has become part of the spectrum of everyday language people use to describe feeling sad or low. This makes it hard for people to understand the real difference between feeling sad (a natural response to aspects of life) and suffering from depression. This can influence people who have never had a mental health problem and therefore fail to understand why you can’t ‘cheer up’. Of course, it also affects people who are themselves struggling with depression and feel they are a failure for feeling something they see as unnaturally sad or incapable. A greater linguistic distinction would be helpful. Unipolar seems to be becoming a more popular term, purely to get away from the overused ‘depression’.

However, even if ‘depression’ was used purely to describe a type of mental illness like schizophrenia or bipolar, it doesn’t explain what that actually feels like. Metaphor can help to pin these feelings down. It allows us to portray something that can’t be easily reduced to simple factual words. Instead, we are using language of shared experience to transfer a feeling. We are explaining something in the mind in terms of something else, something outside of us that others have also experienced. This means both people can take a step back and examine it as something separate. It becomes something more people can relate to. Everyone knows what it feels like to be in fog or can imagine what being trapped constantly behind glass feels like.

The endless potential of metaphorical language also allows us to identify more easily the variations of experience that form part of a mental health difficulty. And identifying the experiences is a step towards understanding and managing them. Using depression as an example, if someone is able to say ‘today is a foggy day, and that’s usually followed by days behind a glass wall – but I’ve noticed that the glass wall phase only comes if I have been drinking’, then they are in a good position to take make decisions and take positive steps forward. We can help people to think about and describe their experience and make those more detailed distinctions.

In fact, it’s hard to see how we can discuss personal conscious experience in the depth needed to provide support with mental health without comparing it’s activities to other things we can see in the world outside. Like that famous ‘does red look to you like red looks to me?’ question, everyone’s experience of ‘happy’ may be very different, and we’ll never know – but you could argue that this matters less – as long as it is a positive experience.

On the other hand, in order to provide mental health support for others, and for others to feel like they are understood, it’s important that we find a way of trying to share more creatively what an experience actually feels like. And people react positively to the recognition of a shared feeling through metaphor – whether it’s a special poem they feel captures their experience, a personal story that they can relate to or some written support online. Capturing something that shows that the person behind the screen really understands what they are going through.

It’s also worth recognising the power of language and metaphor not only to describe a negative feeling, but to change your perspective on it by reframing it using more positive language.  For example, I have heard a relationship described as ‘spread thin, squashed and suffocated’ by one party suffering from depression and the difficulties that caused. The language powerfully portrays a sense of the destructive nature of mental illness on relationships and is potentially something others, including the other person involved, could relate to and understand. Perhaps as part of helping this couple feel more positive about their future, their experience could be described as ‘struggling with and learning to manage the introduction of a difficult new ball in the juggling act that is any relationship’. Suddenly, while not completely positive, the experience feels like something which has an end, something recognisably difficult but something that can be managed and something that they are not the only people to experience.

Metaphor and simile in online support

In a world of online support, all we have is words.  We can’t use body language or tone of voice to convey empathy or understanding. In fact, many of the people who come to online support services specifically choose them because they don’t have to speak to someone face to face, instead taking their time to write everything down, to make sense of it and to ask questions without embarrassment. In addition, services like a community  or discussion forum allow people going through similar things to share their feelings, and take time to find new ways to express and understand them, in a way that would be hard offline to anywhere near the same extent.  I’ve pulled out some examples of metaphor in personal stories written by users of TheSite.org;

“Most of the time I felt drunk on grief. It’s a hard emotion to explain unless you have felt it ? I felt like I wasn’t really in control, like I was running on auto pilot and not thinking straight and at the same time there was a giant cave of sadness in my stomach….I had been running and running and finally I had stopped to catch my breath and it had caught up with me.” – from a personal story on Step Finder.

“I felt such utter despair it rocked straight through my core leaving me with emptiness……..it was the start of an incredibly downhill spiral …..I still have days where I feel empty” – from a personal story on Step Finder

You can read some of the reactions and recognition these stories created in my previous blog here.

Part of our role is to ensure people feel the same empathy and understanding from us through the words we use. If by listening to their metaphors, sharing ours and using language creatively to describe  and break down experiences, they know that we understand how they feel then they are more likely to trust us. They will feel less alone in their experience. They will be able to better understand and talk about their own emotions and to think about the suggestions for support and management we offer.