Glad to have an eating disorder?

I’m not linking… but you can Google…

Apparently Liz Jones is glad she has an eating disorder. In her latest piece for the Mail, she tells us that recovery is so hard that it’s easier not to try. She’s lived with an eating disorder for so long that she’d rather take refuge in behaviours that feel safe than deal with the messy and fluctuating business of balanced eating.

She’s lived with an eating disorder for so long that she’d rather take refuge in behaviours that feel safe than deal with the messy and fluctuating business of balanced eating.

She’s certainly right about that.

If you’ve lived with a restrictive eating disorder then gaining weight is quite literally your biggest fear. Recovery means choosing to face it and having the courage to live with it every day. It can be weeks, months or years before it stops being scary and difficult at least some of the time.

Food isn’t just nourishment. It’s both punishment and reward. It’s at once the scariest and the most important thing. Recovery means learning to manage this complex twist of emotions at least three times a day. Forever. It means dealing with other people’s opinions and comments on your changing body.

You’ve probably developed tests and checks to make sure your body is ‘right’ – restricting or purging until you ‘pass’. Recovery means ‘failing’ those tests without spiralling into self-doubt and recrimination. Hundreds of times a day. 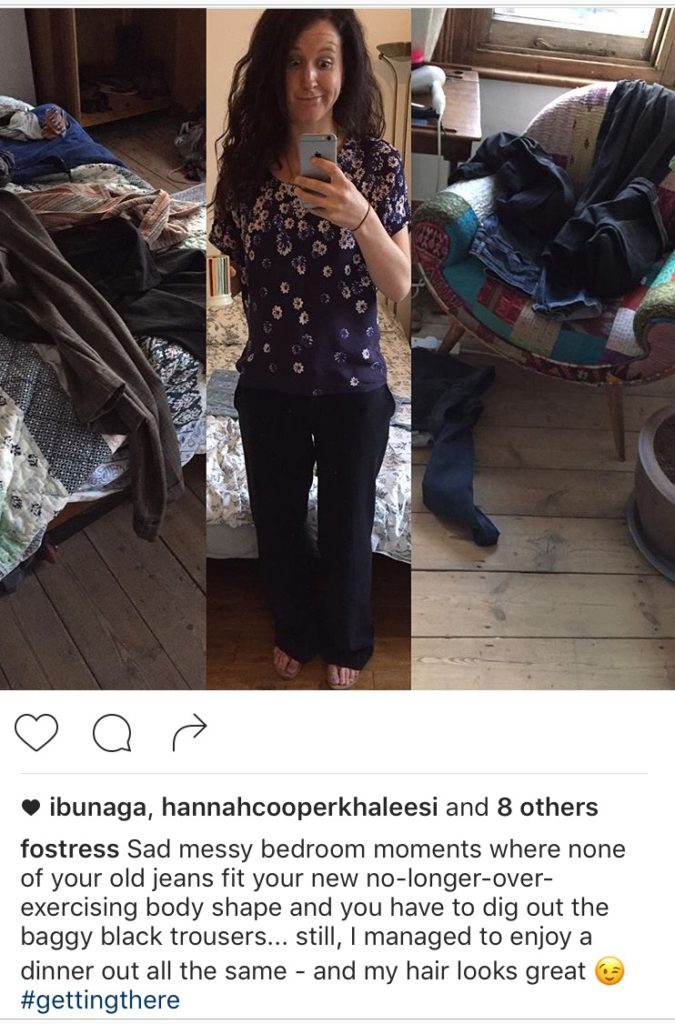 You’ll know exactly how your clothes fit. When you’ve just eaten and your stomach presses against the waistband of your jeans, you’ll interpret this as feeling fat, not full. You’ll make plans to shrink again. Recovery means learning to accept a different body shape. It means time feeling uncomfortable in your own skin.

It means mornings where you hate the person in the mirror. When the temptation to restrict screams down your determination to recover. You’ll be desperate to return to a time that felt safe and controlled. A time when emotions were managed with food and weight. Where there was no need for balance because everything was flat.

Finding that balance involves learning to be happy with the wobbles (no pun intended!). To indulge without panicking or purging. To be hungry sometimes too. To lose and gain weight without it affecting your self-esteem. To accept that sometimes you might relapse and to have the courage to start again. To run and ride and stretch for joy and not to balance the books. To be lazy and to enjoy it. To eat without earning it. It’s messy and emotional.

But recovery also means freedom. It’s facing your biggest fear and realising it’s not as bad as you thought. It’s space in your head for more than calories and calculations. It’s energy and nourishment for your mind. It’s flexibility and hope. 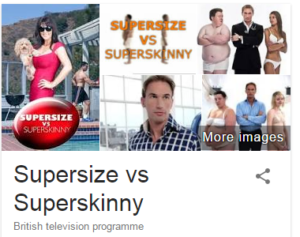 Another program that feeds on vulnerability & promotes comparison…

Her article made me sad. It’s awful that eating disorders and recovery are so misunderstood, that our media’s approach to food and appearance are so warped that someone could feel it’s safer and easier to take refuge in just not eating.

It also made me angry. Talking about numbers of calories or amounts of food might make the piece more dramatic, but it also makes it more damaging. Eating disorders thrive on comparison. This approach just adds to the problem of how we talk about food in our society. I won’t be watching her documentary.

The article comes from a dark and anguished place. It doesn’t tell us that eating disorders are good, it shows us how they take over a life and slowly destroy it. We need to think about how they start and what perpetuates them. We need to make sure that people get help early – when they need it and not when their BMI dictates. We need to understand how incredibly difficult recovery can be and think more about what can be done to help. 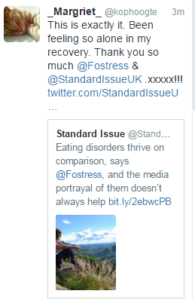 A version of this article is also published in Standard Issue.

6 thoughts on “Recovery is long, messy, uncomfortable and emotional – but i’ll keep trying (and talking)”