“People said it was lucky really. I don’t know how to deal with that” 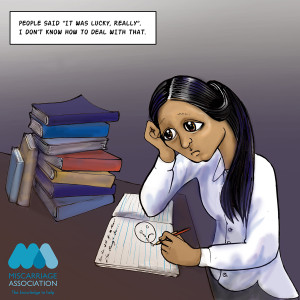 project consultation process I ran for the Miscarriage Association. It highlighted the need for additional support resources that  reflected the experiences of younger people.

Young women told us about dealing with miscarriage after an unplanned pregnancy, finding themselves isolated and unable to speak to parents or partners, turning only to friends for support and experiencing difficult reactions from hospital and nursing staff.

And now I’m excited to help the Miscarriage Association launch the resources we developed as a result.

A soft launch at Primary Care 2015

They were universally well received and we sent boxes worth of leaflets out into the world as well as showing our new films (created for us by Rob Mitchell of MadCutta films) and chatting to anyone who would listen about what we were up to. It was wonderful to see how many people benefitted from the work the Miscarriage Association does – professionally but also in some cases personally.
END_OF_DOCUMENT_TOKEN_TO_BE_REPLACED

I’ve been thinking a lot about sport, and running for mental health recently. This is partly due to

work – I’m involved in the development of Mind’s Get Set To Go programme through the Elefriends community. I’ve also written a number of posts for New Level on the benefits of exercise for mental health and wellbeing.

There’s a strong personal connection too. Exercise is a vital tool for managing my own depression and anxiety. Recently I’ve been struggling to balance my mental health needs against the need to rest and recover after physical injury (darn knees!).

It feels as if more and more people are running. There’s definitely more people out and about in the parks and along the canals. This spring and summer has seen thousands of running events across the UK. One of the best things about these events is that each one is full of people pushing themselves for charities that mean a lot to them.

One of these runners is Christie Plumb. She’s running the British 10k for Sane after losing her

Mum when she was 11. Christie told me she felt that the stigma surrounding mental health problems and a lack of support contributed to her mother’s death. The work of charities like Sane and Mind are helping to reduce that stigma and provide support to those who need it.

Fundraising has helped her to open up about her mum’s death, to talk about it and give people ways to support her.

But Christie has found that running has helped her too. She said that before her boyfriend suggested the NHS Couch to 5k she was convinced that running was “impossible, physically impossible for me”. But she stuck at it and found it was helping with her own anxiety, clearing her mind and improving her confidence.

I really identified with the way she described running her way out of very strong feelings of anxiety and panic.

“Within the first mile, my chest loosens up and I’m not shaking any more. It’s incredible…before the Couch to 5k I had never got past that first barrier. Now I always carry on and push through. In a way it’s an analogy for pushing through anxiety and depression. You just have to keep going, even if it feels like you can’t. You’ll get there in the end.”

In running she has found a way to honour the memory of her Mum, to talk openly about her loss to people around her, to support a charity that means a lot to her and to look after her own mental health. To sponsor her, take a look at her JustGiving page here. To have a go at Couch to 5k yourself, take a look at this page. Who knows where it might lead.