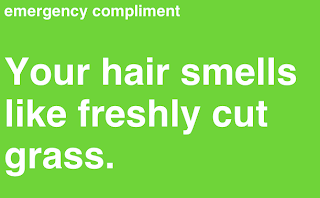 Yesterday and today, a twitter friend @TheAgentApsley and I were engaging in small scale hashtag creation #passonacompliment. It started with a TheSite.org member sharing an ‘emergency compliment’ website.

While I love it, and it brought a smile to my face, it’s a little impersonal. Unless of course my hair does smell like a lawn – and somehow the website elves know….

…no, it’s definitely random as the next one I got was; 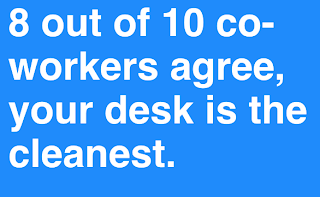 Which DEFINITELY isn’t true (my desk). However. I tweeted the link. In response @TheAgentApsley told me about a compliment booth he’d once volunteered in – where he would give people compliments in return for a donation.

I didn’t ask, but I bet that’s a good way of fundraising. Who can resist a compliment? It always gives you a little boost – and makes you feel closer to the person giving it as well. The only time I’ve ever actually stopped for a chugger on the street was when he started his pitch with ‘I like your hair’ (he might have been slightly-scruffy-but-in-a-good-looking-way as well – guilty). I still remember the evening a friend from the north messaged me out of the blue with a really kind and genuine compliment. It made my evening, and still makes me smile now when I think of it.

And, talking of hair, my old manager always told the story of the family friend who he really liked, and felt close to. He hadn’t noticed until his wife mentioned it that this person seemed to make a point of complimenting his hair every time she visited. Subtly, complimenting him regularly had warmed him to her.

Whenever I’ve worked with young people on TheSite.org, we always make a point of making sure that we remind them of the positive things that they have done as well as helping them resolve the difficulties they face. This might be their impressive strength in the face of odds stacked against them, their concern for their friend, the peer support they offer others – or simply the fact that they have taken the brave and difficult step to seek support at all. It’s important that people are reminded of the things they’re doing well – as hardly anyone does that for themselves. Many people spend much of their time being down on themselves one way or another. They often don’t even really feel that anyone properly notices much that they do. This is particularly true of anyone suffering from depression or any other mental health problem that fogs up your thinking with negativity.

So we started complimenting people on Twitter – making our (more personal) version of the compliment generator and encouraging them to pass it on to someone else. Social media (and Twitter perhaps more than most) is full of people finding fault with other people, and telling them so in no uncertain terms. We wanted to brighten peoples’ day, just a little, by doing the opposite. 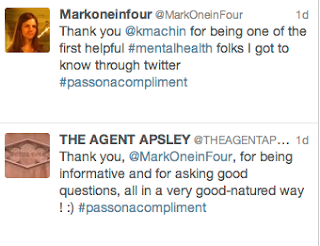 Granted we didn’t compliment loads of people so it was never going to spread that far. But the ones that we did, in general, passed it on. Interestingly, those who did pass it on were often people involved in mental health discussion and writing online. Perhaps they saw the value in that little boost of wellbeing for others.

So, this is quite a simple blog post. It’s not saying anything groundbreaking or world changing (unless everyone started to compliment others more, in which case it might be a little). It’s just reminding people (as we were reminded) of the pleasure you can give and receive by genuinely complimenting people when they don’t expect it – and encouraging you to do so.

And by the way, you’re really kind to give my blog the time of day. And your hair looks great (probably)!

2 thoughts on “Compliments and wellbeing – #passonacompliment!”